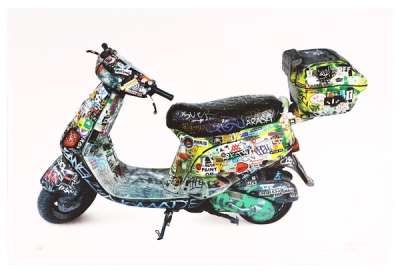 Not typical tiled-Invader style, Scooters prints were released in 2015 in response to his controversial Hong Kong exhibition Wipe Out.

This signed print was released in 2015, on the occasion of Invader’s solo exhibition Wipe Out held at the Hong Kong Contemporary Art Foundation [HOCA] in Hong Kong. Invader’s relationship with Hong Kong has always been somewhat problematic. In January 2014, the artist invaded the city for the third time, after thirteen years since his first invasion. However, whilst Invader’s pieces were loved by the border public, the Invasion’s fate was doomed since nearly 90% of the artworks got removed from the city after a few weeks, ‘‘wiped-out by an overzealous local highway cleaning crew’’, according to the HOCA curatorial statement.

Wipe Out was a reaction to such an iconoclastic gesture, and claimed to respond to the ‘‘systematic removal of art from the streets of Hong Kong’’. In addition to exhibiting his aliases from previous invasions, his Rubikcubes and other never-before-seen pieces, Invader placed his sticker-covered scooter on view as part of the exhibition, here the subject of the print. The Scooter installation, Invader claim, was meant to mirror a 2002 installation by the late Tsang Tsou Choi (King of Kowloon) called Calligraphy on Scooter and responded to the controversial relationship between the specificities of Hong Kong and its local tradition of Street art.

In addition to paying homage to the undisputed father of Graffiti Art in Hong Kong, the Scooter installation had also a sentimental value for the artist. In an interview, Invader claimed that on display there was his actual scooter, which he has owned for over 15 years. The stickers on it were placed by his fellow artist friends, who would attach one each time they would come to Paris to see Invader.

Thus, the Scooter print stands also for Invader’s engagement with the Street Art community, even if the artist is personally responsible for each of the artworks he puts up and does not rely on a team to help him. Some of the stickers, Invader claims, were put up by Banksy, who included Invader in his Exit Through the Gift Shop: A Banksy Film in a show of respect for the French artist. In Banksy’s movie, the director Invader is shown meeting Thierry Guetta, better known under the pseudonym Mr Brainwash, Invader’s alleged cousin and fellow world-renowned Street Artist who also placed different stickers on the scooter. After their encounter, the movie moves on to feature Shepard Fairy, who had shown his admiration for Invader’s works when stating that ‘'by taking the risk of illegally re-contextualizing video game characters in an urban environment that provides more chaotic social interaction than a gamer's bedroom, [Invader] makes a statement about the desensitizing nature of video games and consumer culture.’’

A uniquely original piece within his production, this print differs largely from Invader’s more well known Space Invaders, but attests instead to the position of respect within the Street Art community his Space Invaders have afforded him, and visually records how Invader participates in a broader discourse on Street art, popular culture, and the cities he engages with and their artistic traditions.

Hello My Game Is