Referencing key moments in art history in his work, José Parlá is best known for his large, mural-style paintings that combine the aesthetics of abstraction and calligraphic techniques. To buy or sell prints and editions from Parlá's portfolio browse available artwork from our network and enquire today. Contact us for complimentary market advice and free valuations on any print, with zero obligation to sell. 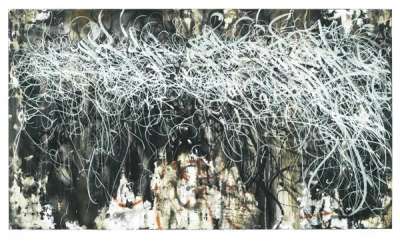 One of the most exciting artists working today, José Parla is best known for his graffiti-inspired abstract expressionist aesthetic. Parlá’s work references key moments in Contemporary art history, from Abstract Expressionism to graffiti and even calligraphy.

Parlá’s career began at just 10 years old, when he started painting walls in his hometown. Influenced by the burgeoning hip-hop scene of the day, Parlá would sign his artworks with the tag ‘Ease’. In 1986, Parlá and a few fellow graffiti writers founded the graffiti crews IKOA – or ‘International Kings of Art’ – and VIP – or ‘Vandals in Power’.

At 16, Parlá received a prominent scholarship to study at the Savannah College of Art & Design. Upon completion of his first degree in art, Parlá returned to Miami where he continued to study advanced painting at the New World School of the Arts and studied under Mel Alexenberg – a prominent American-Israeli artist known for his experimentations with technology and so-called ‘participatory’ art.

Parlá began to exhibit prints and paintings in various solo exhibitions in Atlanta while he was still a student. However, his first major solo show didn’t take place until 2006, when he exhibited at Art Basel Miami Beach.

At the time, Parlá’s works were characterised by their experimentation with tactile media, like clay and ceramics, where he would inscribe complex and eminently calligraphic graffiti tags. These palimpsestic works were part of the artist’s wider interest in both the texture of cities and the so-called ‘urban fabric’: tangible themes he continues to grapple with today.

Throughout the remainder of the 2000s, there was a shift in Parlá’s art from small-scale paintings imbued with movement and lyricism, to works that depicted the surfaces of the city and the memories with which they are inscribed. 2012 saw Parlá complete his beloved large-scale painting, Gesture Performing Dance. Measuring 37 feet long by 7 feet, the work adorns the side of The Brooklyn Academy Of Music in the artist’s adoptive home of New York.

Later that year, Parlá had his breakthrough moment when he collaborated with notable French street artist, photographer and documentary filmmaker JR on Wrinkles Of The City: Havana. The pair worked on the multi-form piece as part of the Havana Biennale, photographing around 25 older Cubans who had lived through the country’s revolution in 1953-1959 and pasting their profiles onto a number of buildings in the city; Parlá’s signature calligraphy accompanied the portraits, ascribing a dream-like texture to the city’s dilapidated urban surfaces.

In 2013, Parlá was invited to make an artwork for the lobby of One World Trade Center in New York City.