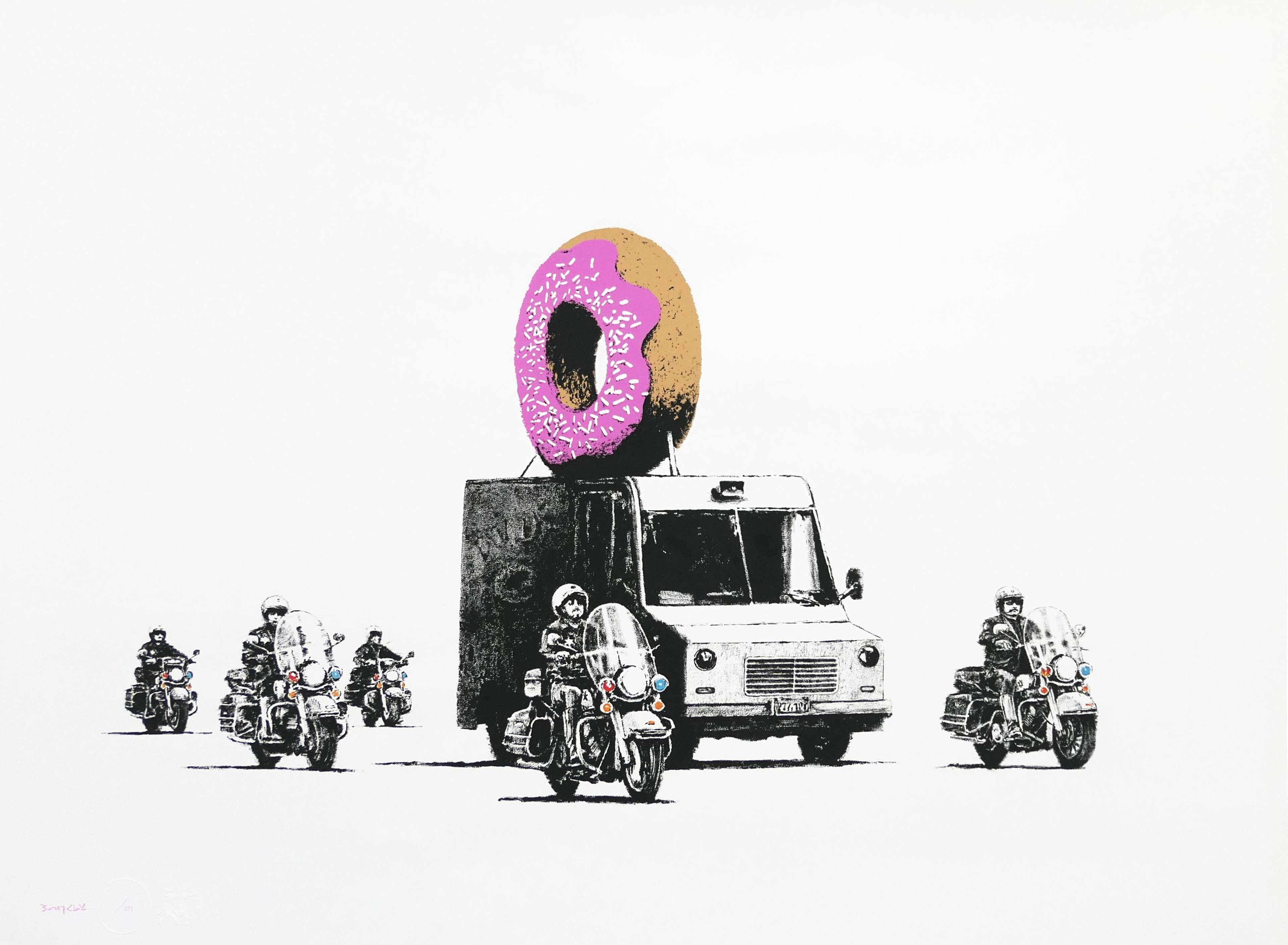 Banksy’s Donut print may look sweet, but it holds a bitter message about contemporary American culture.

When was Banksy’s Donuts created?

Banksy’s Donuts first appeared on canvas in 2009 in the pink colourway; the artwork shows a procession of five American police officers on motorcycles, escorting a police van holding an oversized, iced doughnut on top. Banksy is known for his high-profile street art but, unusually for the artist, Donuts never appeared as a mural and has only existed as paintings or screenprints.

There are two ‘flavours’ of Donuts

The edition number is a nod to Krispy Kreme

What is the meaning behind Banksy’s Donuts?

Banksy’s art often appears lighthearted and designed to make the viewer laugh – in this work, the seriousness of the police is humorous when contrasted with the ridiculousness of their giant doughnut cargo. But Banksy often uses humour as a vehicle to address serious subjects: through his work, he tackles issues of politics, violence, capitalism and consumerism.

Donuts is a commentary on the state of American culture. The doughnut could be a reference to the lazy, coffee- and doughnut-guzzling police officer known as “Officer Donut” in TV and cinema, or a symbol for Western companies (such as Krispy Kreme) and corporate interests that are fiercely guarded by the authorities.

The doughnut could be Banksy’s metaphor for the American Dream

While the glazed doughnut is an iconic symbol of American everyday life and culture, in Donuts, Banksy might be using it as a metaphor for the American Dream: it looks sweet and flawless, but it is all a sugar-coated façade… and one with a big hole in the middle.

Donuts might be a reference to JFK’s supposed “doughnut” blunder

On 26 June 1963, President John F. Kennedy stood by the Wall in West Berlin and delivered one of his most eloquent speeches, concluding with the now-infamous phrase, “Ich bin ein Berliner”, or “I am a Berliner”. A ‘Berliner’, however, is also a German jam-filled doughnut, which has led to Kennedy being misquoted to declaring “I am a doughnut”. In Banksy’s Donuts, the convoy of armed police officers looks similar to the presidential motorcade, as if they were chaperoning a doughnut leader.

Andy Warhol may also have been an inspiration

There are similarities not only in Warhol and Banksy’s silkscreen printing techniques, but also in their subjects. Banksy has paid homage to Warhol’s masterpieces in his prints Kate Moss and Soup Cans. Likewise Donuts, where a doughnut takes centre stage and is the focus of the police officers’ protection, can be a Warhol-style comment on the items or brands we buy, consume and glorify. Banksy takes an ordinary, everyday object and uses it to reflect culture and society.

What is the most expensive Donuts print at auction?

The highest price for a regular, signed edition of Donuts is £117,000 with fees, which was paid for a Donuts (strawberry) in a London auction in March 2021.

But special editions of Donuts can go for even higher

Donuts is one of many Banksy artworks ridiculing the police

Banksy uses the police to represent the shortfalls of authority figures. In his earlier 2002 print Rude Copper, he turns the idea of the cheerful British bobby on its head by showing a police officer offering a middle finger to the viewer. Meanwhile, he highlights the unfair targeting of immigrants and minorities following the controversial Stop and Search legislation in his 2007 print Stop And Search.