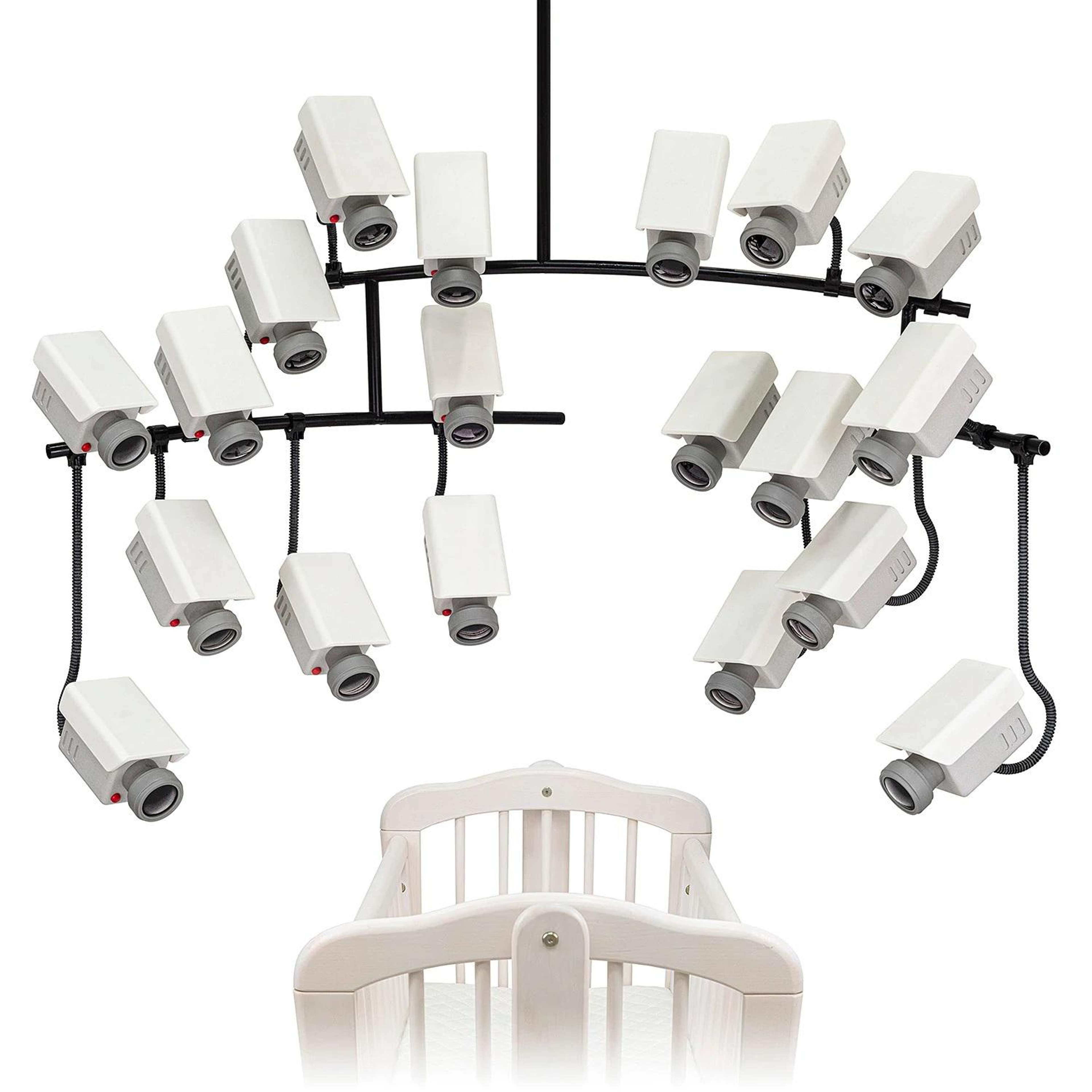 'Banksy has created the ultimate ceiling mounted stimulus toy to prepare your little one for the journey ahead - a lifetime of constant scrutiny both state sanctioned and self imposed. Doesn’t rotate very well, some self assembly required.' – Gross Domestic Product.

Returning to a theme that has prevailed throughout Banksy’s street art career, the Banksy™ Baby Mobile is representative of the surveillance culture we live in. Described as the ‘ultimate ceiling mounted stimulus toy to prepare your little one for the journey ahead’ the work is a barbed comment on the ubiquity of CCTV in our so called progressive and liberal society as well as the surveillance we allow into our homes by way of browser cookies and gadgets such as the iPhone or Amazon Alexa which follow us wherever we go online and listen to what we say, reporting back on our behaviour and creating interminable amounts of data which are then sold to the highest bidder.

The work also specifically follows on from such Banksy masterpieces as One Nation under CCTV, sprayed onto a wall in London in 2007 as well as a limited edition print made for his Dismaland park which features two CCTV cameras depicted as scorpions about to spring into action. Similarly, his Countryside painting depicts a pastoral scene marred by the sight of a tall pole to which is affixed not one but three CCTV cameras.

For Banksy the CCTV camera is perhaps the ultimate signifier for the urban environment, a symbol to be mocked and studied not only for its surveillance of society at large but also for its role in the endless attempts to unveil his true identity. With headlines such as ‘Dark figure caught on film beside Banksy mural’ and ‘CCTV captures Banksy dressed as workman’, any time a new Banksy appears on the street, there are hundreds of news reports ready to claim a shadowy figure caught on CCTV as being the elusive artist. Dogged by CCTV at every turn of his career it is no wonder this anonymous artist has chosen it, along with the rat, as one of the most important elements in his iconography.

While the press and the authorities are always on the lookout for signs of Banksy’s next move, the launch of Gross Domestic Product, the artist’s ‘homewares brand’ caught everybody unawares.

A showroom was put together almost overnight in South London’s Croydon which, once identified as a Banksy artwork by a member of the public, soon went viral with queues of people trying to get inside. The showroom never opened however; instead fans were entreated to go online to buy from this new line of Banksy products. As well as CCTV themed mobiles there they could find similar works that poked fun at the state and our compliance with it, including a riot helmet disco ball and even the Union Jack stab vest worn by Stormzy at Glastonbury in 2019. The store was a huge success with every product selling out, while of course the artist was himself accused of selling out by critics and collectors who saw the opening of a shop as a cheapening of his brand. But for an artist whose aim was always to make his art and politics accessible to the public, GDP achieved exactly what it set out to do.