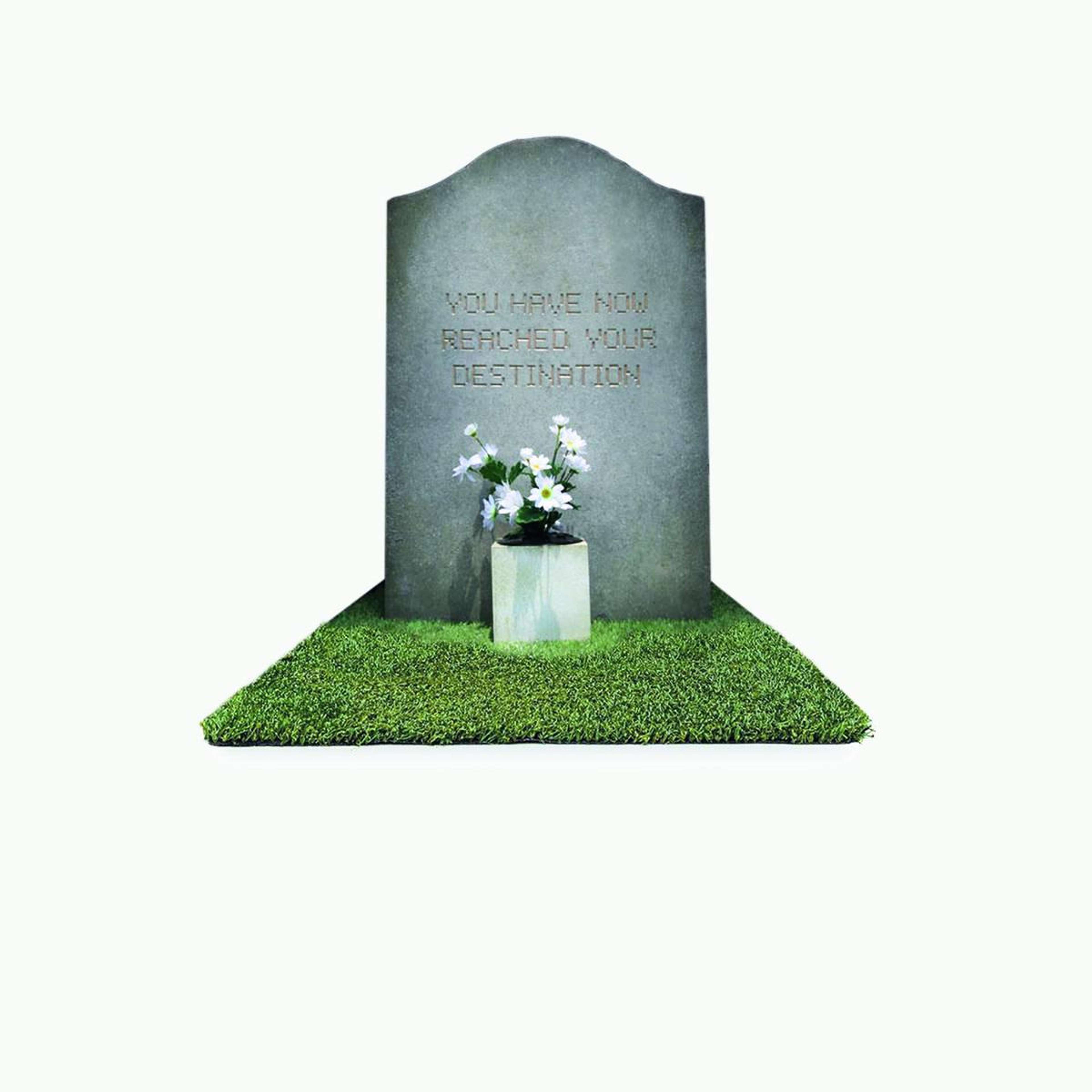 'What do you buy for the person who has everything? A 230 kg reminder that you can’t take it with you. Hand carved by Banksy in a slab of Portland stone.' Gross Domestic Product.

Cumbersome in size, the work serves as a weighty reminder of death, the only certainty in life, while at the same time perhaps making fun of the British po-faced attitude towards it. Once again Banksy turns a mirror to our collective identity, showing us the farce behind the traditions that bind us together and keep us locked into a structure of rationality and fear to which his work offers some light relief.

‘What do you buy for the person who has everything?’ asked Gross Domestic Product, Banksy's ‘homewares brand’ which launched in 2019. A tombstone of course. But not just any tombstone, this is also ‘A 230kg reminder that you can’t take [everything] with you’.

Emblazoned with the message ‘You have now reached your destination’ in a font that mimics the pixelated text of video games or bus announcements, the work, made from Portland stone, is hand carved by Banksy himself. It was highly sought after following the launch of GDP and was only available to collect in person ‘from the quarry’ in yet another layer of the elaborate joke the artist played on fans and critic with the opening of the GDP showroom in Croydon, South London. Those who came expecting to be able to walk home with an original Banksy artwork were disappointed to find that the only way to buy was online, and by answering the question ‘why does art matter?’ in order to be entered into a competition cum lottery system that was intended to keep out people buying purely for investment. Find out more.

The present work further demonstrates Banksy's long running suspicion of the consumer market, offering a dark comment on our society’s need to commoditise everything, including death. In this vein Tombstone follows works such as Trolley Hunters and Sale Ends Today as well as the Banksy Rug in its open attack on the capitalist mindset that privileges private property over shared ownership. The work also demonstrates the artist’s fascination with death and mortality as themes to be exploited for their humour as well as their sadness, as seen in the famous Grim Reaper motif which he adapted to replace the traditional skull with a smiley face. In this way Banksy joins a long line of artists who use memento mori in their work, in order to remind the viewer that ‘you too must die’, such as Frans Hals, Nicolas Poussin and Hans Holbein. With the present work, rather than employing the skull or scythe as a symbol of death, Banksy conveys his message with a tombstone, the traditional marker of death in Western society, that while less shocking than the skull, still holds an uneasy feeling of mortality in its well known shape.