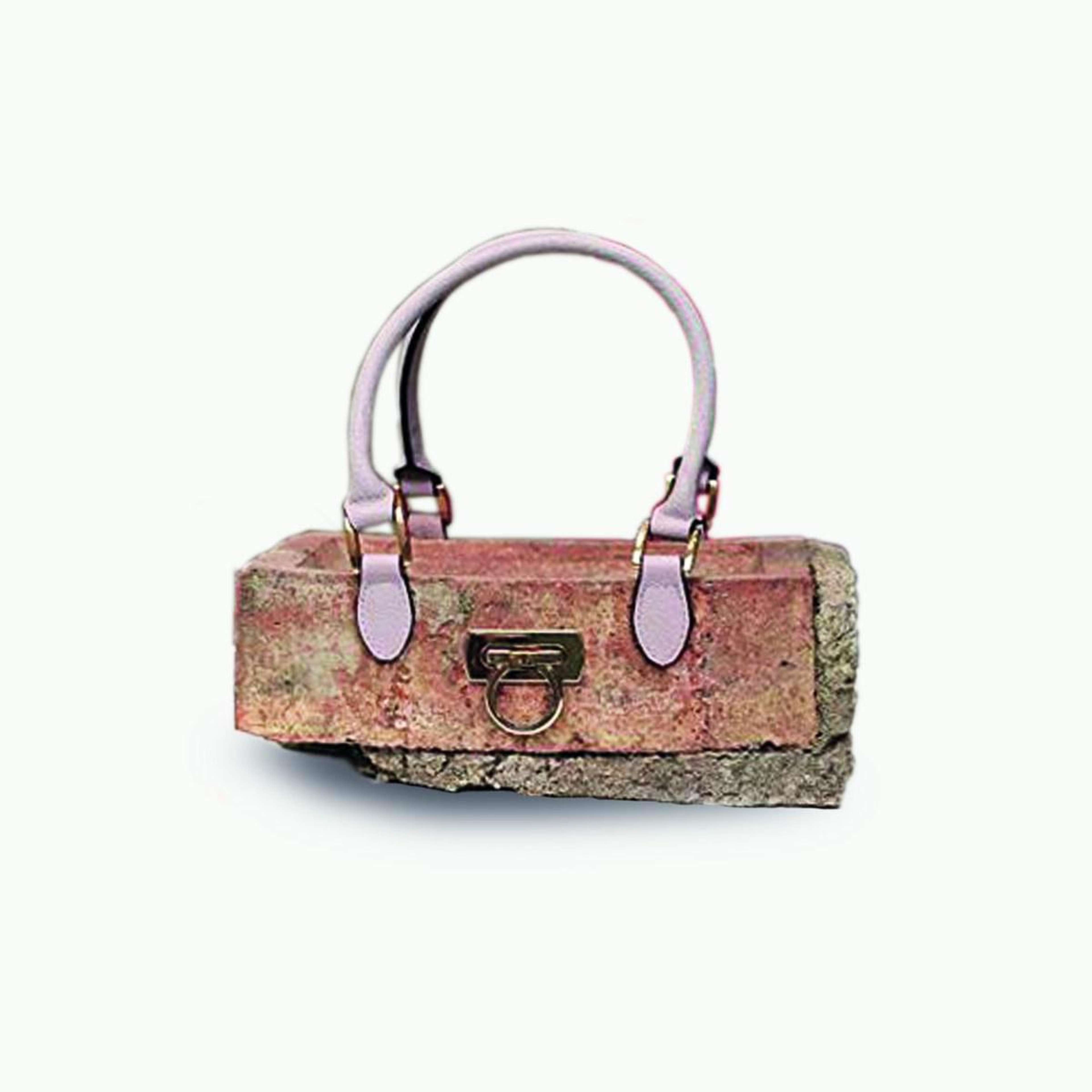 This fashion-forward accessory is made from a genuine real life house brick and is perfect for the kind of person who doesn’t carry much but might need to whack someone in the face. Probably no less practical than the output of most haute couture fashion houses.' – Gross Domestic Product.

Banksy’s Clutch Bag was originally shown in the Gross Domestic Product showroom in Croydon, South London, which the artist opened in 2019 to much acclaim from his fans and collectors. In a notice on the shopfront he outlined his reasons for opening a shop, stating that it had come about ‘as a result of legal action’ from a greeting card company who tried to trademark his name. In order to combat this impending commercialisation of the Banksy brand, the artist decided to sell his own line of ‘domestic products’ which were distributed via a lottery system rather than sold on a first come first served basis. This stunt ensured the online shop was inundated with ‘applications’ which resulted in all the products selling out almost immediately and becoming limited edition collector’s items today.

Originally described on Banksy’s Gross Domestic Product online shop, as a ‘fashion-forward accessory’ this piece is a genuine house brick made to look like a handbag. The object brings together the brick, the essential tool of the builder, rioter and burglar, with certain elements of a handbag, giving the former a more genteel quality in this witty combination.

When it was first sold online, the GDP description helpfully suggested the piece might be ‘perfect for the kind of person who doesn’t carry much but might need to whack someone in the face.’ With its tongue in cheek humour and evident ingenuity, the Banksy Clutch bag is typical of Banksy’s oeuvre in which street art and vandalism merge with satire and art history to create a new visual language with which to parse the damage done by neoliberalism and austerity in the 21st century. With its anarchic associations the brick handbag can be seen as a reference to an earlier work entitled Love Is In The Air (Flower Thrower) in which Banksy shows a man with a bandana over his face frozen in the act of throwing not a brick or a molotov cocktail, but a bunch of flowers at an unseen target. With the present work, made in 2019, the artist seems to have evolved from the pretty pacifism of his previous message to a more aggressive and yet complex symbol in the shape of the house brick. Taken from an actual house rather than made to order, the brick is loaded with meaning, suggesting the work could also be about the ongoing housing crisis and the ever increasing rise of homelessness. The work also takes a stab at the fashion industry with its large amounts of waste and exploitation involved in manufacturing methods, with the original description for the bag stating that the piece was ‘Probably no less practical than the output of most haute couture fashion houses.’