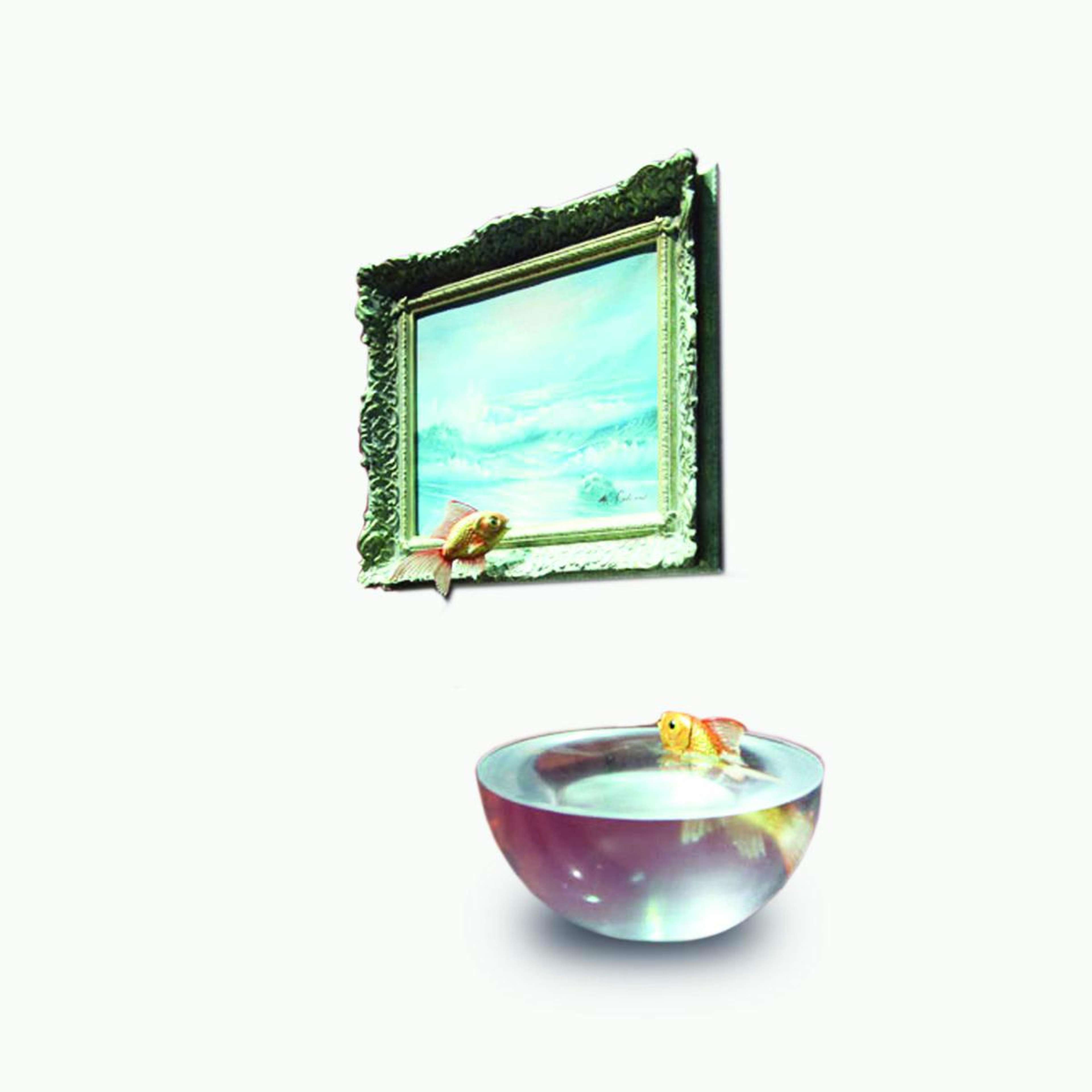 'Due to some issues with bubbles that need to be ironed out, this product will be available in the New Year.' - Gross Domestic Product.

This mixed media piece is a typically humorous take on the strictures of capitalist society and our relationship with animals. Banksy™ Goldfish is comprised of what looks like a bowl of water cast in resin with a goldfish poking its head out whilst above hangs a painting of a wild sea in a gilt frame, which is being assailed by another goldfish, seemingly in the act of trying to reach its watery depths. The joke here is of course on the goldfish who cannot tell a 2d picture from the real thing and on us – the pair of goldfish can be read as stand ins for humans in a society where our lives are structured around the working week and our freedom restricted to weekends holidays. In this way Banksy presents us as slaves to a system that holds the promise of freedom, as the painting does, only to reveal it to be a shallow imitation of liberty. The original description for the work asked, ‘are you the kind of person who likes their pets to come inert and table-mounted?’ before claiming the work represented ‘the futile pursuit of the unattainable’.

The work builds on a previous piece of graffiti the artist sprayed onto a wall of the towpath of Regent’s Canal in Camden which shows a living room outlined in white on a black wall featuring a goldfish making a leap for freedom towards a painting of an idyllic beach scene. Interestingly, the original work came about as a result of a long running feud between Banksy and street artist King Robbo who was outraged when Banksy covered up one of his tags on this spot. A street art ‘battle’ ensued with both artists trying to outdo each other, armed with spray paint and stencils, until eventually a third party – possibly the local council – intervened and painted the wall black, creating the perfect canvas for this scene.

They were only available to buy online however, from Banksy’s new ‘homewares brand’. Shunning the traditional retail model Banksy added another layer of complexity to his shop, entreating potential customers to ‘apply’ for a piece rather than buying it on a first come first served basis. This only added to the slew of comments and column inches that already accompanied the venture and as it went viral more and more people joined the queue to play Banksy’s game which involved answering the question ‘Why does art matter?’ before being able to get their hands on his wares.