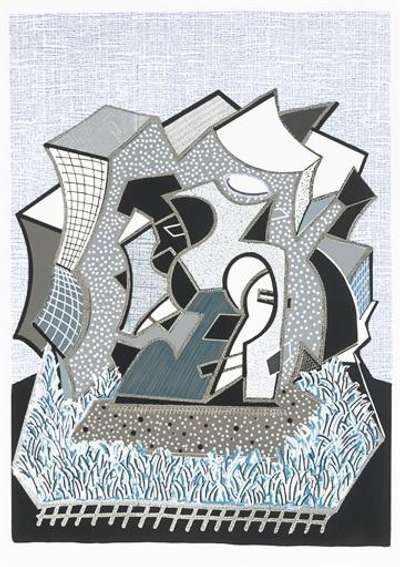 A series of abstracted narratives, the 1991 prints Eine, Deux and Très stem from Hockney’s long-standing engagement with theatre. Attracting widespread acclaim, Hockney’s theatrical forays began in 1975, when the artist worked as a set designer for a hugely successful showing of Stravinsky’s The Rake’s Progress at Glyndebourne Opera House in Lewes, East Sussex, UK. Hockney’s set designs acted as well-conceived visual accompaniments to the three-act avant-garde opera, inspired by William Hogarth’s world-famous print series of the same name; employing cross-hatching to mimic Hogarth’s engraving techniques, they served as a visual link between the opera’s satirical, moralistic subject matter, its music, and the stage environment.

As preparation for a further design commission, this time for a showing of Richard Strauss’s opera, Die Frau Ohne Schatten, which went on to open at the Royal Opera House in London’s Covent Garden in 1992, Hockney took inspiration from French artist Sofia Delaunay and British contemporary Howard Hodgkin. As such, he went on to make a series of abstract sketches which echo the lithographic prints of Eines, Deux, Très. Recalling these, Hockney remarked, “The first thing I made for Die Frau, on a small model, was an abstract representation of a river, like a snake.”

As a series of abstracted narratives, the prints Eine (Part I), Deux (Second Part) and Très (End of Triple) are similar in that they each appear to take the natural world as their initial inspiration, with the base of their many geometric shapes evoking grass, scrub, and even water, as in the last print of the series, Très (End of Triple). In these lithographs, the natural is nonetheless almost entirely excluded: buried beneath a layer of jagged geometric forms which testify to the artist’s development of a non-representational approach to stage design, the man-made triumphs over its organic cousin, imposing a rigid configuration of shapes which remain the same in each print, albeit with minor variations in colour and texture.

In each piece, the background appears flat; its unchanging two-dimensionality evocative of Hockney’s Cubist influences, particularly the work of Picasso. Pushing the boundaries of the abstract and the lifelike, these prints nonetheless represent a chronology that explores changes in light conditions, evoking Hockney’s use of Vari-Lite technologies in the 1995 print series, Snails Space. Bringing an imagined and decidedly non-representational space into explosive convergence with the real world of theatre, its music, actors, and audience, however, the many lines and dots present in each print appear to shift: turning a simple print into a stage and back again, cross-hatching morphs when submitted to different inks and colour schemes, each suggestive of a variety of illuminations Beginning with Eine (Part I), light gradually exits the scene, a cross-hatched background fading to darkness by the end of the series in Très (End of Triple).