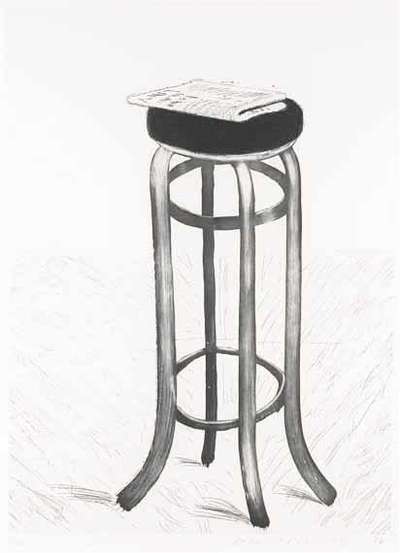 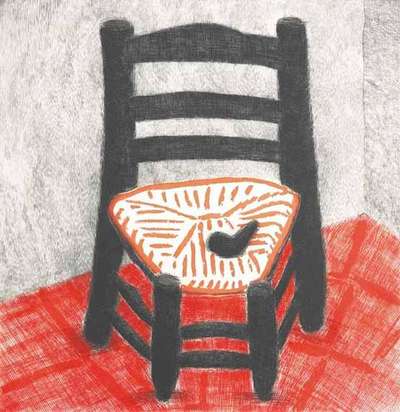 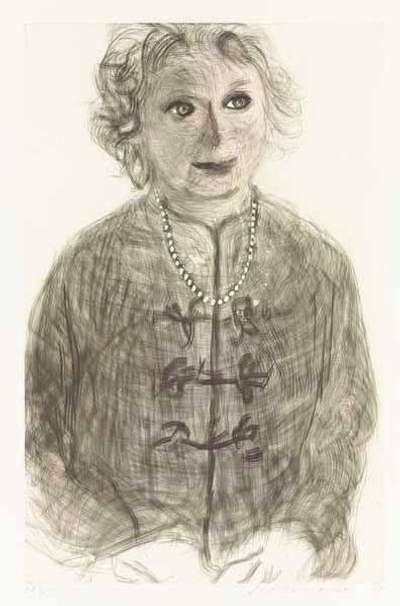 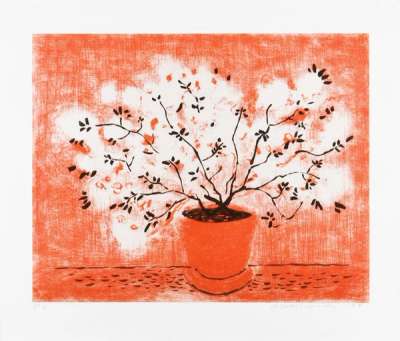 Comprised of 14 works, Hockney’s Recent Etchings series sees him revisit his popular subjects, such as chairs, flowers and Celia Birtwell

In Van Gogh Chair, in white and black variations, Hockney returns to the simple wicker chair he has depicted many times before, including as part of the Moving Focus series. The works are an homage to Van Gogh, a painter he greatly admired – he has even compared his move to LA in the 60s as being similar to ‘Van Gogh going to Arles’ in terms of the effect it had on his painting. Here we see Hockney take Van Gogh’s famous chair, which is shown unoccupied and side on, and turn it so that it faces the viewer squarely, forcing a distortion of perspective which Hockney has resolved by making the front of the seat narrower than the back, resulting in an oddly squashed square that resembles a pyramid with its top chopped off. An even more overt reference to Van Gogh can be found in the pipe that lays on the wicker seat, which makes us feel the absence of the sitter even more. The pipe appears to have been left there without thought, almost carelessly, as if the subject of this missing portrait had left the scene only momentarily.

Steel Stool With Newspaper presents us with another piece of furniture that has been set up as if for a portrait and has been recently vacated. Here a tall bar stool is shown in monochrome, a folded newspaper resting upon it, its background barely picked out, its shadow almost invisible. The series also comprises a number of still lifes including Red Wire Plant which shows Hockney’s enduring love for painting and drawing flowers. Here the plant takes on an almost ethereal aspect, its wiry stalks wreathed in cotton wool like blossom, showing where the etching plate has been left without ink. The softness of this still life is echoed in Soft Celia, a portrait of Hockney’s close friend and textile designer Celia Birtwell who has appeared in hundreds of the artist’s works. Executed in 1998 this series shows how Birtwell has aged since her earliest appearance in Hockney’s paintings and prints, and we are faced with a woman who, while markedly different to her youthful self, still holds us captive with her large eyes and calm expression. She is shown looking away from the viewer (and the artist), as if she knows something we do not. Wearing a simple Japanese jacket, her hands are lightly folded in her lap, her signature curls tumbling down to frame her now middle aged face. Other portraits in this series include two etchings of Brenda Zlamany, one where she is holding her belly as if she is pregnant and the other a portrait of her smoking. Finally, Maurice Payne, Hockney’s long term collaborator, also features in this series. It was Maurice who prepared the plates for the etchings so that Hockney would be free to draw directly onto them, in order to depict the objects and figures that fascinated him from his daily life.