Snails Space served as a jump-off point for more of Hockney’s many photographic investigations; capturing these works under different light conditions, Hockney would then print and further manipulate their representation through painting and further photographic experimentation. 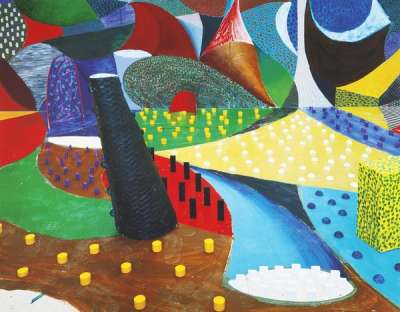 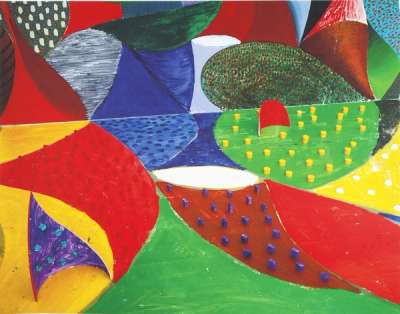 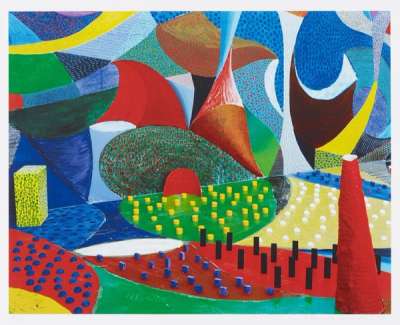 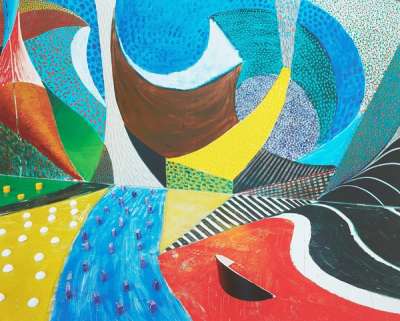 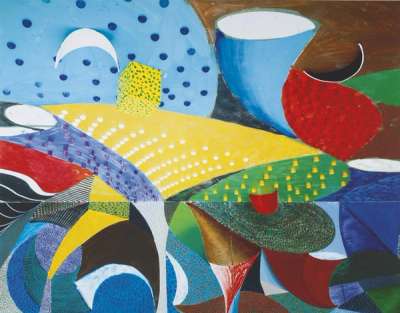 The signed print series, Snails Space, captures details of Hockney’s 1995 mixed-media installation at the Smithsonian Museum in Washington. The large-scale piece was exhibited at Washington D.C.’s Smithsonian Museum in the same year. The signed print series Snails Space captures the individual details of this mixed media installation piece, a striking and remarkably unique element of Hockney’s wider œuvre that makes an extended use of abstraction.

Comprising oil on two canvases, acrylic paints on canvas-covered Masonite and wood dowels, Snails Space With Vari-Lites makes use of Vari-Lite automated lighting systems, used extensively by touring musical groups, theatrical shows, and television and film studios. Hockney’s incorporation of this lighting technology into the artwork recalls his extensive involvement in theatre during the 1970s and ’80s, and a long fascination with the stage – a subject which Hockney had been experimenting with in his art well before his time spent working as the costume and stage designer for performances at the Metropolitan Opera, New York in 1981. Indeed, Snails Space harks all the way back to Hockney’s design production work for a showing of Stravinsky’s The Rake’s Progress at the Glyndebourne Festival in 1975, as assembled in the print series Hockney And The Stage.

Experimenting with the notion of scale – a theme which Hockney continues to be fascinated by, as his return visits to Utah’s Grand Canyon testify – the Snails Space series evokes the artist’s 1990 work, Mulholland Drive: The Road to the Studio. Measuring 7 by 20 feet, the sheer scale of this assemblage of mixed media elicits a considered act of ‘looking’ also referenced by its title; a self-referential pun not unusual for the tongue-in-cheek Hockney, Snails Pace wishes us to spend our time absorbing its many intricacies, as well as the way that they shift under changing light conditions. Composed as part of a wider series entitled Painting as Performance, Snails Space develops upon Hockney’s 1994 works in Painted Environments.

Snails Space served as a jump-off point for more of Hockney’s many photographic investigations; capturing these works under different light conditions, Hockney would then print and further manipulate their representation through painting and further photographic experimentation, as in as in Fifth Detail, Snails Space, March 27th 1995. Aside from the obvious presence of the camera in Snails Space, the composition’s nature as composite directly reflect’s Hockney’s innovative ‘joiner images’, characteristic of the Photo Collages series. In a mode similar to Walking In The Zen Garden At The Ryoanji Temple (1983), the prints in the Snails Space series are almost cartographic in their geometry.

The limits of the canvas were also no obstruction to the willed distortion and elision of boundaries between artwork and gallery space. Commenting on the genre-bending nature of the piece depicted in this print series, Hockney once said: “The original painting is on two canvases measuring 84 by 240 inches, but I decided to continue the painting on the floor immediately in front of it, so we constructed a three-dimensional extension using real cubes, cones, and cylinders”.