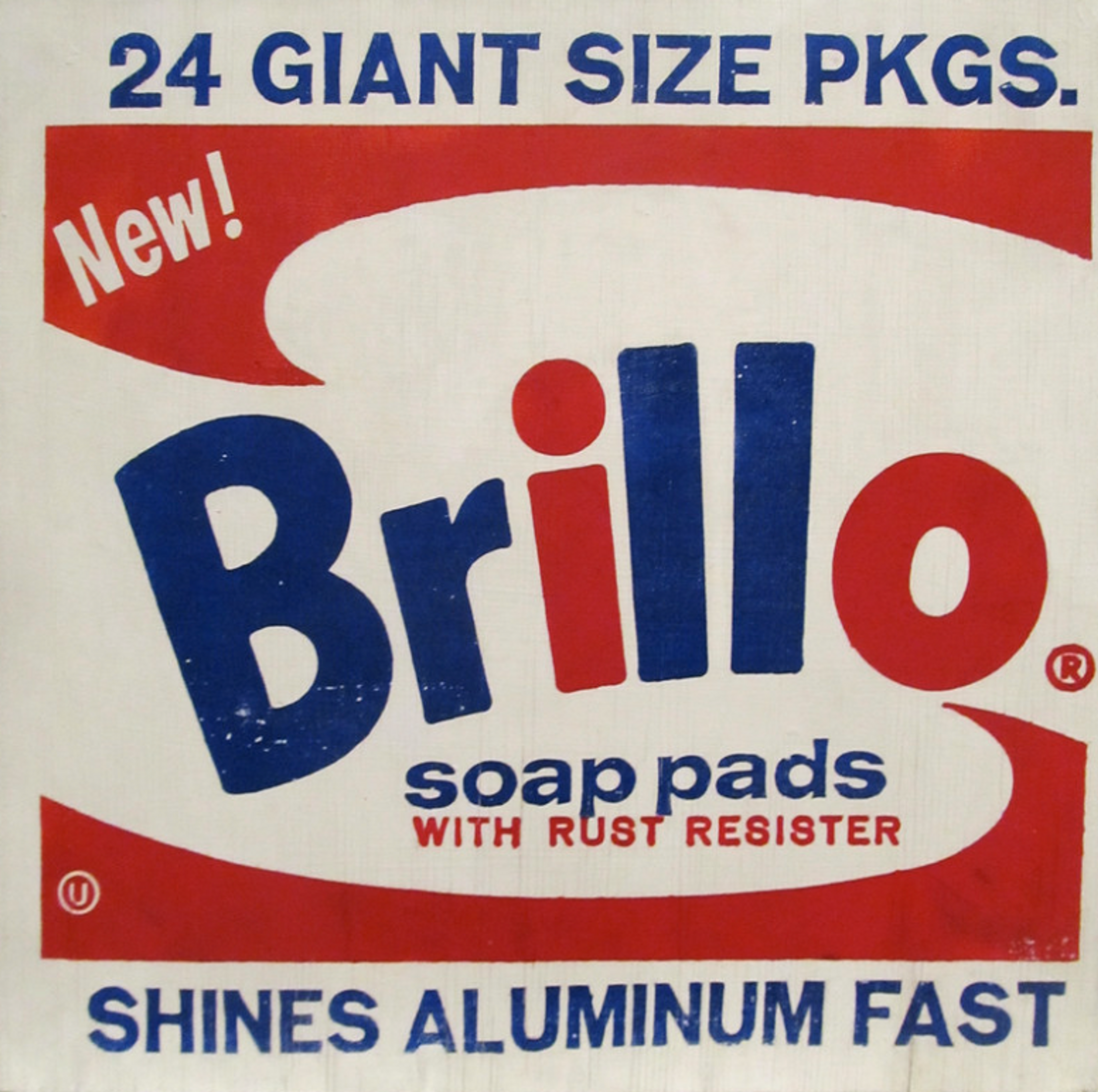 The Brillo Box is an image that has now become synonymous with the king of Pop Art and consumerist champion Andy Warhol. To learn more, see our 10 facts below:

When did Warhol create Brillo Box?

Warhol unveiled the first Brillo Boxes at the Stable Gallery in New York in 1964. But the artist had been replicating grocery store products since 1962, first creating screenprints of Campbell’s soup cans, then sculptures of packaging for Kellogg’s cornﬂakes, Heinz ketchup, Brillo soap pads and other brands.

On 28 January 1964, Warhol moved into a new workspace, one of his many locations for his studio, The Factory. “A few days after the move… a truckload of wood boxes arrived,” recalled Gerard Malanga, Warhol’s studio assistant at the time.

What is the meaning behind Warhol’s Brillo Box?

Warhol appropriated the Brillo Box from another artist

The real boxes for Brillo soap pads were designed in 1961 by James Harvey, a commercial artist by day and an Abstract Expressionist painter by night. When Harvey walked past Warhol’s Stable Gallery exhibition on 21 April 1964, he reportedly said, “Oh my god, I designed those.” Harvey did not consider Warhol’s appropriation as ‘art’.

In a 1964 interview, Warhol was asked by a reporter, “you have just then copied a common item… why have you bothered to do that, why not create something new?”, to which Warhol replied, “because it’s easier to do… it gives me something to do.”

What was the reaction to Brillo Box?

Warhol had high hopes for his Brillo Boxes but their reception was controversial – art critics questioned if the sculptures were art, and one visitor to the Stable Gallery exhibition wrote “SHIT” in the guest book. Eleanor Ward, the art dealer at Stable Gallery at the time, remembered that the Brillo Boxes were “very difficult to sell…We all had visions of people walking down Madison Avenue with these boxes under their arms, but we never saw them.”

How many variations of Brillo Boxes are there?

For a retrospective of his work at the Pasadena Art Museum from 12 May – 21 June 1970, Warhol created this screen-printed exhibition poster of a Brillo Box in a special green, blue and yellow colour variation. A hundred extra Brillo Box sculptures were also created for the event.

Today, Brillo Box is one of Warhol’s most recognisable works

Like Campbell’s Soup Cans, Brillo Boxes epitomise Warhol’s fascination with mass-produced images, packaging and items, blurring the line between art and everyday commodities. Brillo Box sculptures are now in the collections of the Museum of Modern Art in New York, the Philadelphia Museum of Art and Princeton University Art Museum. This, in turn, has created high demand for Brillo Box sculptures at auction.

Artist Charles Lutz presented an art installation of replica cardboard Brillo Boxes at the Armory Show, New York, in 2013. Titled BABEL (Brillo Stockholm Type), the idea was to “disseminate the Brillo Box to the masses,” explained Lutz in a video interview with Blouin Artinfo. “Each day, a new BABEL tower is erected out of Brillo Boxes and each visitor is encouraged to take one, fulfilling Warhol’s idea of everyone in New York City carrying around a Brillo Box.”

Brillo Box (3 cents off) almost quadrupled its high estimate of US$800,000 when it sold for US$3,050,500 at Christie’s in New York on 10 November 2010. The sculpture was purchased in 1969 by Martin and Rita Skyler for just US$1,000, and was later owned by British collector Charles Saatchi and Robert Shapazian, the late founding director of Gagosian Gallery.

Martin and Rita Skyler’s daughter Lisanne wrote and directed a documentary about Brillo Box (3 cents off). It was shortlisted for an Oscar award in 2016.

A perfect symbol of celebrity, beauty and death, Marylin Monroe is the ultimate Andy Warhol print. So, to provide some insight, here are 10 key facts about one of the most famous works of art in the...
Andy Warhol

Moving away from portraits, advertisements and politically loaded subjects, the Flowers are some of the most beloved Andy Warhol prints. To learn more about this series and the history of his floral...